My history with Brother Firetribe goes back to the Heart Full Of Fire album, where I discovered them and took Wildest Dreams and Runaways with me onwards, as they struck me as standout, fantastic songs. I thought of the band as an interesting curiosity, channeling a retro vibe, but missing something to get me completely hooked.

Fast forward 9 years and Sunbound arrives. I decide to give the band another chance and suddenly, it just clicks. I listen constantly to Sunbound, which I find to be an absolute wonder, as it captures an atmosphere, I thought was lost in the 80'ies, in addition to delivering a bunch of fantastic songs.

Then I notice that the band is planning a tour with a stop in Hamburg, and I start listening seriously to their back catalogue, only to discover, that I have missed out on an extraordinary band all this time. As a result I fall completely in love with their music, as I start gearing up for the show at Knust. The friends I ask are unable to come along, so instead I take my family along, and we plan a mini vacation in Hamburg.

Unfortunately two days before leaving I get really sick, but we decide to go anyway, with the hope that I will get better.

When I woke up in the morning of the concert, I was still not in great shape, but nothing terminal, so it was a go. We left the hotel to check out Hamburg and first of all, went by the venue, to make sure I would be able to find it in the evening. There we saw the tour bus had already arrived. I said a quick hello to the lead singer of Brother Firetribe, Pekka Heino, as we walked by.

11 hours later, after walking around central Hamburg all day, and having said goodbye and see you later, to my wife and daughter, I was back at the venue, a bit tired in my legs, and still sick, but more than ready for the concert, which I wouldn't want to miss for the world.

Knust was a great concert venue, with a proper stage and a cool vibe. Also, the sound was excellent for both bands, with just the right volume.

I grabbed a beer at the bar and went to the stage, where I got a good spot in the second row at the left. It was about five minutes before the opening band, Shiraz Lane went on and I had planned on taking it easy, just enjoying a few slow beers during their show, to warm up for the headliner.

But Shiraz Lane really blew me away and delivered a show filled with energy and attitude. I'd only managed to give their debut album one listen before the show, but I was pretty amazed in the way they delivered live. Lead singer Hannes Kett's voice held up amazingly well and he had a superb stage presence. 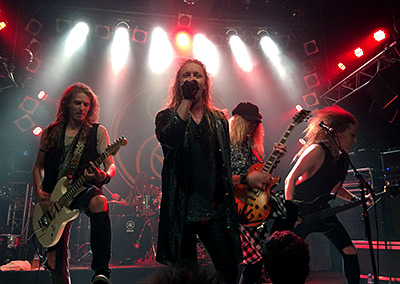 In fact, that can be said for the whole band, as they were all over the stage, constantly moving around and interacting with each other and the audience. The band has a new album coming out and they played several songs of that. At one point, Hannes and one of the guitarists jumped into the audience and had some fun.

I was reminded of some of my old Enuff Z'nuff bootleg shows, where their spirit and energy really shone through. I got that same hungry vibe here, and that was enough for me to make a mental note to keep my eyes on this band.

During the Shiraz Lane show, halfway through a Jack Daniels and Coke, my plan of attack somehow changed from "take it easy" to "Drink, sing, jump, sweat and burn out this illness".

After Shiraz Lane left the stage, it was cleared and set up for Brother Firetribe, who was going to to play at/on Ten. Waiting around in the second row, I started talking to a guy, who was standing behind me. He was from Kiel and was there with his sister, who incidentally had the same favorite BF song as me, Big City Dream, and we all had a nice chat before the concert.

Somehow, the bartender recognized me every time I approached the bar, and after a while, it sunk in that it was time to switch gears again, so after the process of approaching the bar, the bartender looking up and immediately asking "Another one?", I switched back to a beer.

Finally, Brother Firetribe took the stage and the band began playing Sunbound, the intro. It was good to see a band actually playing their intro for real, instead of going for the playback tape. As expected, Help Is On The Way was the opening song and it was clear that this band is gooooood live. 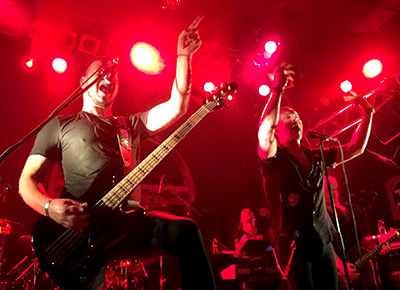 I immediately started executing my plan of attack, much to the enjoyment of myself, but maybe not quite so much for the rest of the audience.

You have to realize, that I have fallen completely in love with this band and all those emotions came pouring out all the way through the show, as I tried to give some of that back to the band on stage, by means of singing beautifully along, jumping in tight rhythm with the music and acting out certain parts of songs. I'm sure I succeeded in only one of those things, but what was certain, was that I experienced one of the most enjoyable concerts in a long time.

The band was really tight and had a lot of fun on stage, as they continued the show with Indelible Heroes. I'd gotten a bit tired of the song but hearing it live, gave it a new lease on life and it came across just excellently. 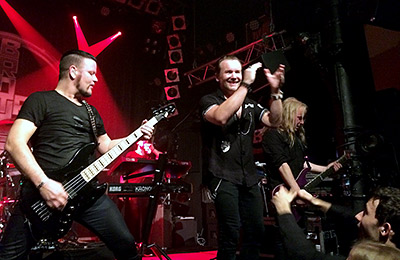 One Single Breath from the debut really took my breath away, as it kept me jumping. It was fantastic to hear this one live and it slowly became clear to me that Brother Firetribe should always play live. They are even better than on record, which is pretty amazing. The band was all smiles, and it felt like they enjoyed themselves immensely, or maybe it was just that I looked completely hilarious in my jump routine, I don't know.

The music is perfect party music and live, it just bounced off the walls of the venue, and invigorated me in a special way.

When Pekka adressed the crowd, three songs in, and thanked us for coming out, he pointed straight at me, with a wide grin, and said "This guy knows the songs better than I do". I was slightly taken aback, but seem to remember shouting the first thing I could think of back at him, which was "I'm On Fire!". It was a moment to remember right there, far out.

In spite of my sore throat, I sang Heart Of The Matter louder than hell (Sorry to those in the close vicinity), and when the band started playing the intro to For Better Or Worse, I took a deep breath before going absolutely bananas with joy.

Other people joined my joyous display of affection in the second row and I ended up jumping with a few other guys to the chorus, while making fists at the stage. 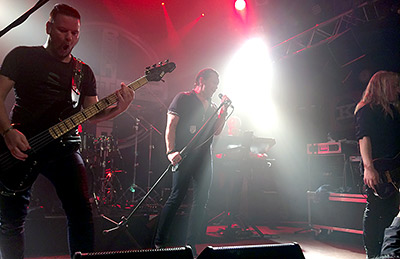 At this point, I was back on Jack Daniels and coke, after managing to get the sister from Kiel, I mentioned earlier, but cannot remember the name of, to bring me a drink, when she went to get something for her and her brother.

Shock was an amazing live moment too. I was soaked at this point and the song was a nice breather. However, this didn't stop me singing along, nor acting out the song, as I, hand on heart, followed by "embracing the stage", did my best to capture the essence of the song during its chorus.

Shock was followed by Runaways, and I immediately jumped back into the fray. It goes without saying that this song is perfect in a live situation, and I remember it being a massive highlight, even if I cannot recount the minute details, I was simply too into the concert. 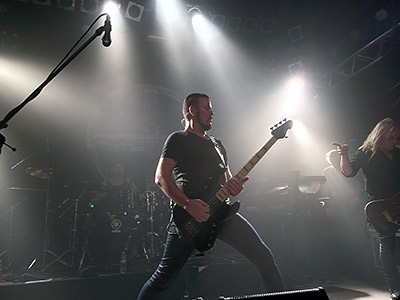 Highlights just continued coming, and I enjoyed every single song they played to the fullest, but Taste Of A Champion has to be mentioned because it was a highlight among highlights. I had thought about mimicking hitting myself on the chin during the opening line, but I can't remember, if I actually did this. I think not. It was great to hear this song though, and I think everyone in the audience felt its power.

At one point I turned around and noticed that the Kiel siblings had new beers and it turned out that the sister had made a bar run. I tried, in my own ironic way, to reprimand them for not asking me if I needed anything, and failed. The brother obviously felt sorry for me and offered a taste of his beer, which I gladly took him up on, but while tasting it, lightning struck my mind and I remembered that I was sick, so I had to communicate to this guy that I was sick and had just tasted his beer, and I could not give it back in good conscience, so I now had to drink his whole beer, leaving him empty handed. He handled it rather well, and refused my first offer to reimburse him for the beer. Altogether, this was not my finest moment, and if you two are reading this, please excuse my somewhat excessive behavior. I will buy the next round of beers if we ever meet up again.

Highlights during the last part of the show included I'm On Fire, where I jumped long and hard with the other guys in the second row and it was another moment of perfection. 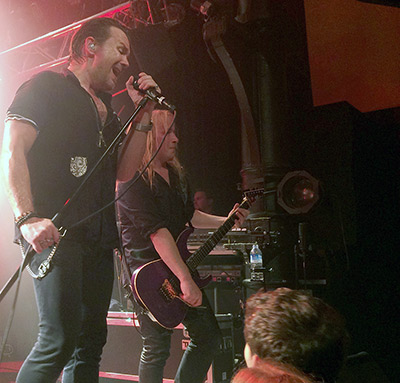 I Am Rock ended the show on a powerful note. It was a perfect closer, but I couldn't help feeling gutted that my favorite song, Big City Dream, had been cut from the setlist.

It didn't help that when I got a picture of the setlist later that night, I saw what else had been cut. Personal favorites like Wildest Dreams, Restless Heart, Midnight Queen and Valerie were all part of the set list but had to be cut, I learned later, since the promoter had only allowed the band to play for 75 minutes, so it was understandable.

In the end, I am so happy that I got to experience Brother Firetribe live, and I am happy for every song they played. The missed songs and the knowledge that they are part of the set list, only makes me wish I could catch them again sometime in the near future.

Brother Firetribe's show was an intense experience and I cannot put into words what I felt, but above, I have tried to describe my experience as best I remember it. I wish I would have been more clear-headed and noticed more details, but they tend to disappear, when you go as crazy as I did for this concert. Four days later, my arms and legs still hurt.

I gave it all and took away with me, the memory of a completely far out show, where performance, audience and atmosphere all merged into an ecstatic feeling of contentment and joy. It was a testament to the power of music and how it moves me. This was one of those shows, I wish would last forever. 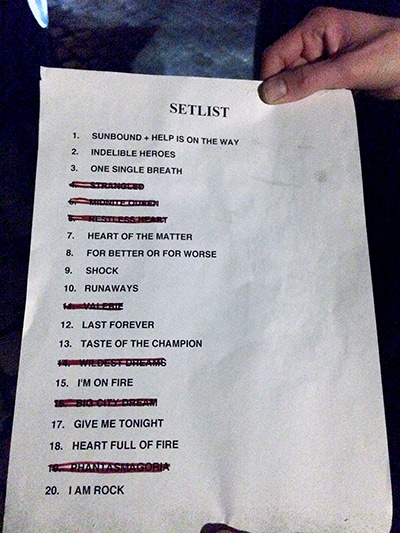